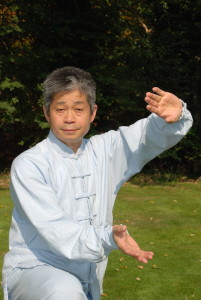 Master Michael Tse is one of the most well-known teachers of Qigong, Chinese Martial Arts and Chinese Culture in the west. Through the loyalty to his teachers and hard work and dedication, he has built up a strong following of students all around the world.

When he was ten years old, he went to see his first Bruce Lee movie, Enter the Dragon. Like everyone else in the cinema, he was caught up in the Bruce Lee fever and cheered Lee on with the rest of the audience during the movie. That moment changed his life and from there he began his dream of becoming a martial artist.

Although he did not know any skill, he began to imitate the movements he had seen on screen and also to do more physical things, like press ups and running. Then at the age of fourteen, however, he got the opportunity to study Wing Chun Kung Fu with his uncle through the following event.

He says, “My grandmother had sent me to walk her dog which was quite large. Somehow, I tripped and landed badly on my wrist, fracturing it. At that time, people did not have the modern treatments they do today and so I was sent to my uncle who was a bonesetter and herbalist. He manipulated my bones by quickly clicking them back into position. Afterwards, he tied some wooden splints to my forearm and then bound them with a few strips of cloth. In this way, the skin was still open to the air and could breathe.

While my uncle was treating me, I saw some people the next room doing some sort of martial arts and asked him what it was they were doing. He said it was Wing Chun Kung Fu. I was so excited. Straight away I asked him if I could study with him. My family was quite poor and so it was arranged that I would help him gathering herbs and doing other chores. Then he would teach me in exchange. This is how I began my Wing Chun training.” 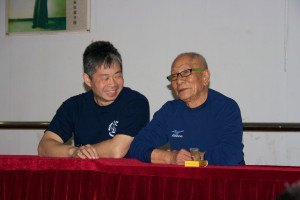 “When my uncle passed away, I had to find another teacher. I had heard of Grandmaster Ip Chun and also had seen an ad for his class. Soon after that I became Grandmaster Ip Chun’s student. He helped me to understand the subtlety behind the power of Wing Chun, using less strength and less energy to defeat your opponent.”

Michael Tse remains very close to Grandmaster Ip Chun even after so many years. He says, “Sifu is a true gentleman and one of the most amazing people I have ever met. Not only is his skill outstanding, but also his attitude and out-look on life. I am very lucky to find a teacher like this.”

Developing a taste for Qigong

Whilst training with his uncle, Michael first came across Qi and this marked another turning point in his studies. He recalls, “From my Wing Chun  training, I had my first experience of feeling Qi moving through my body while I was practicing the Siu Lim Tao, Wing Chun’s first form. This form is performed very slowly so that internal energy can develop in the body and the mind can become calm.

This was at the time that China was just beginning to open its doors after the Cultural Revolution. Much skill which had previously been hidden, suddenly began to be opened to the public, including hard and soft Qigong. I knew that this was something I wanted to learn. I have always loved reading and I bought every book and magazine that I could find on the subject of Qigong.”

Master Tse first began studying Hard Qigong. As with his Wing Chun before, he dedicated himself to his training and so his level developed.  Hard Qigong has been used by martial artists throughout the centuries as a way of developing internal Qi and strengthening the skin, bones and muscle to enable them to withstand strong blows without injury. As the student progresses through each level, his or her body is tested by various means.

He says, “We had to break bricks over the head and cement slabs, even lying on a bed of steel spikes. Our final test was to have a lorry drive over us. Passing all these tests, I felt that I wanted to now know more about soft Qigong.” 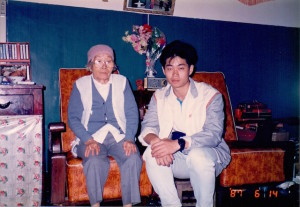 Master Tse’s Hard Qigong teacher was a very generous person. Knowing that Michael wanted to learn more about soft Qigong he introduced him to Grandmaster Yang Meijun, who was the 27th generation holder of the Kunlun Dayan Qigong skill.

Michael continues, “He said that she was the best and that her skill was very high level. At this time, I was a policeman in the Royal Hong Kong police force and I used all my holidays and weekends for studying. Whenever I could, I travelled to China to visit Grandmaster Yang Meijun, often staying at her home for several weeks at a time in order to further develop my skill. I began with the popular Wild Goose Qigong and moved onto other forms within the system. After several years, she began to teach me Qigong healing and diagnosis, which I now use with my patients.”

“When I told her I was moving to the UK, she encouraged me to teach and spread her Dayan Qigong skill.” 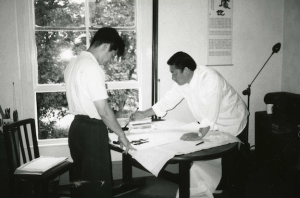 During this time, Master Tse had also begun to study Chen Taijiquan under Grandmaster Chen Xiao Wang and Northern Shaolin under Master Wu Chun Yuen. It is these skills, Wing Chun, Qigong, Shaolin and Taijiquan that makes up the syllabus of Traditional Chinese skills that he teaches to his students today.

In order to help promote the traditional Chinese skills that he learned, in 1990 Master Michael Tse founded the Tse Qigong Centre.  He says about this,”There are many different styles of Qigong and martial arts, but I wanted the things that I taught to be under the umbrella of the Tse Qigong Centre. This also gave my students something that they could call their own. Over the years, the Centre has come to mean more than an umbrella for skill. It is like a family. Anyone who studies with myself or my students becomes part of the Centre. 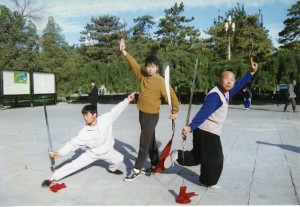 In addition to teaching, I also write books and publish Qi Magazine, a quarterly magazine on the internal arts. Writing is very enjoyable and gives me an opportunity to explain my thoughts and more about skill in greater detail.

I am happy to see the Centre growing. For me, the Centre is like a family. The more people who join in, the happier I am because it means more people are growing healthier. We now have many instructors throughout the world who are authorised instructors of the Tse Qigong Centre.”