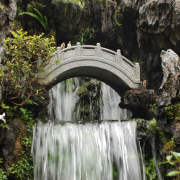 After carrying the people across the river, Qiū Chù Jī 丘處機 decided to stay there and help more people across. He even put up a sign announcing that he would help anyone to cross the river, and people would give him food to thank him for his work. When there was no one needing his help, he would sit on a rock and meditate. Now Qiū Chù Jī was happy because he was doing good deeds.

Time flew by and after six years, Qiū Chù Jī was still carrying people across the river. Then one day, three soldiers, carrying swords and bags, arrived at the riverbank. They saw the sign and asked Qiū Chù Jī to carry them across the river. Qiū Chù Jī carried them over one at a time. However, when he was carrying the last one, something dropped out of the soldier’s bag into the fast flowing water and quickly disappeared. Qiū Chù Jī continued to the other side and put the soldier down. When he looked at them they were very afraid.