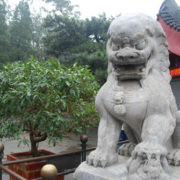 One of the soldiers said, “We are special policemen and have been ordered to capture a fugitive who has committed serious crimes against the country. We caught him and executed him. We cut of his head, and we were taking it back to the emperor. Now we have lost the head and so we will be punished, we might even be executed!” The three soldiers did not know what to do. Suddenly, Qiū Chù Jī 丘處機 took one of the swords and put the blade to his neck, “It is my fault. You can take my head instead and give it to the emperor. Once the emperor knows he will forgive you.”  Qiū Chù Jī was just about to slice his own neck, when the three soldiers suddenly rose into the air and started laughing! Their armour disappeared and was replaced by beautiful robes of different colours. Now they looked more like rich, educated men.

Qiū Chù Jī dropped the sword and looked up in surprise!