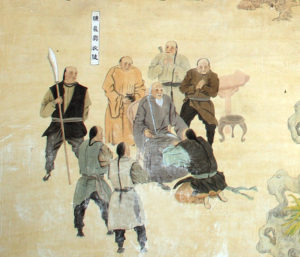 In traditional Chinese culture whenever a Sifu師父 accepted a student a special ceremony was performed which in Cantonese we call Bai Si 拜師, or Mandarin we say Bai Shi拜師.  For Chinese people this is a very serious ceremony and so a special and auspicious day in the Chinese lunar calendar would be chosen to hold the Bai Si ceremony.  Masters from other styles would be invited to witness the proceedings and join the dinner party celebrations which went along afterwards.

During the ceremony the student will bow down on his or her knees to the ancestors of the skill.  They would bow down and touch their forehead to the floor 3 times. They would then turn to their Sifu and Simo who would be seated in front of them and bow down and touch their forehead to the floor again 3 times.  The student would then give their Sifu a red envelope, called Lai Si, which contained  an amount of money which had been agreed (usually other students who had been through the ceremony before would tell the new student how much to put in the envelope).  The student would then, using two hands, respectfully offer their Sifu and Simo a cup of tea to drink.  The Sifu might sometimes give the student something which related to their studies or a card which said that he or she was now one of his students.