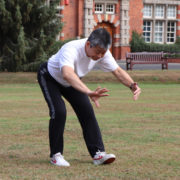 We have twelve channels and we now know that there are six Yin channels and six Yang Channels. In Chinese we call these Jinglou 經絡. Jing 經 means channel, or an orbit. Lou 絡 means net. So it means that in the Jinglou the channels cover the body like net. Within the Jinglou there are six Yin channels, three on the hands and three on the legs. When we talk about the channels in the Jinglou just refer to them as Jing. The three Yin Jing of the hands are Heart, Lung and Pericardium Jing.  Of the three of them, one is All Yin, one is Middle Yin and one is Small Yin.