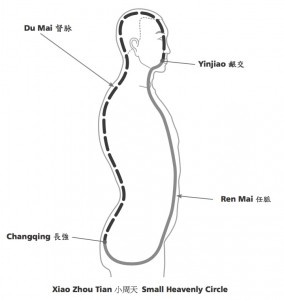 When we are beginning to practise Qigong, we should first do our warm up and then afterwards we need to do Fang Song three times. “Fang放” means “let go”, “Song鬆” means “loosen up”. This movement is the same performed the same way as Shou Gong 收功. We should stand still with our legs shoulder-width apart, slowly raise up two hands either side of our body with the palms open and thumbs open. Opening the palms and the thumb relates to the Laogong 勞宫穴, and Hegu合谷穴 points so we can gather more Qi. As we bring the hands in front of the face we turn the palms so they face us and we slowly drop them down passing the face, shoulders, chest, abdomen and finally coming to rest in front of the Dantian. We repeat this a further two time, so we do it three times in total. Three times is a good number as it helps us to relax before we do our forms.

As we raise up the hands, the Qi will rise up the Du Mai 督脉 from the back. The Du Mai runs from the Huiyin 會陰 point which is between the legs, up the spine, over the top of the head to the mouth which inside the Yinjiao齦交穴 point. As the hands drop down from the face to the Dantian, the Qi will run down the Ren Mai 任脉, from the mouth under the lower lip Cheng Jiang 承漿穴 ponit, to the chest down to the Huiyin point. So we can see that it is important these two channels, the Du and Ren Mai must be clear. So the Qi will flow better.