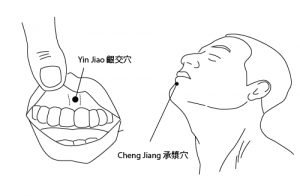 When we practise Qigong, we must understand and know about the Ren 任脉 and Du Mai 督脉. The Ren Mai runs down the front of the body along the centre. It starts at the Huiyin 會陰 point between the legs to the Cheng Jiang point 承漿穴. The Ren Mai controls the blood, the more blood we have the smoother the Ren Mai.

The Du Mai also starts at the Huiyin point and goes up the back, following the spine, the neck to the top of the head and then down the face to the nose and then to centre of the top gum in the mouth and this is the Yin Jiao point 齦交穴 . The Du Mai controls the Qi. More Qi the smoother the Du Mai

We can see that there is a connection of the Ren Channel and the end of the Du Channel at the mouth. When we close the mouth the Ren and Du Mai connect and the Qi can pass through from one to the other, also we will feel calmer and more settled. This because the Qi passes from the Ren Mai to the Du Mai and also the Du Mai passes Qi to the Ren Mai. That is Xiao Zhou Tian小周天, it means “ Small Heavenly Cycle”