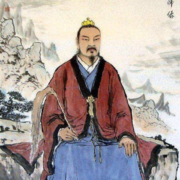 There was a famous Daoist Master named Wáng Chóng Yáng 王重陽 (1112-1170）who had seven students. One of his youngest students was a young man named Qiū Chù Jī 丘處機. Qiū Chù Jī studied Daoism very hard and Wáng Chóng Yáng liked him a lot. After many years, during his meditation Wáng Chóng Yáng left the mortal world, and all his students were happy that their teacher had reached such a high level of Daoism and had become immortal. They all gathered to decide what to do next. Qiū Chù Jī told his Daoist brothers and sisters that he had decided to go west and that he felt strongly that was what he should do.

Qiū Chù Jī said his farewells to everyone and set of walking west. One day he arrived at Zhong Nan Shan 终南山 across a rundown temple he decided to stay there and practise his Daoism and in particular his mediation. He also decided that he would only go to seven nearby houses to ask for food, even if he did not have enough food, he would not ask for more, no matter what he had. So, he settled down at the temple and his daily routine was practising his Daoism and visiting seven homes to ask for food.