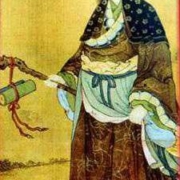 Qiū Chù Jī 丘處機 heard every word the farmer said and understood what he meant. What he did not understand was how the farmer knew that he was just waiting to die. Qiū Chù Jī picked up the peach and ate it. He immediately felt full of energy and all the weakness he had felt was gone. Being full of energy, he decided to leave the temple and continue going west. After many days of walking he came to Xiáxī Shěng Pán Xī Zhèn 陜西省磻溪鎮 – Pan Xi Town, Shan Xi Province and there he came to a river. The river’s current was very strong, and he watched as people dangerously struggled to across the fast-flowing river. It was very dangerous, especially for the old people, children and women.
Qiū Chù Jī thought to himself, “Maybe I should help them.” He was young and stronger than them and so he told the people he could carry them across the river. In the beginning, some people did not believe he would do this, but one old man asked him to take him across the river. Qiū Chù Jī carefully carried the old man across to the opposite side and so the people now believed him. One after another, those who could not cross on their own, asked him to carry them to the other side of the river.