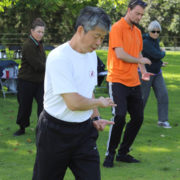 The next morning, after the King woke up and had eaten his breakfast, he called the Daoist to come and see him. When the Daoist arrived, he asked the King, “Your Majesty, how do you feel today?” The King replied, “I feel great!” The Daoist continued to ask, “Do you feel anything else?” The King was curious why he was asking more, but replied, “I am fine, nothing else!” The Daoist was satisfied and said, “That is good. That means I have done what I should have done.” The King suddenly realised that all his itchy rash has gone! He was cured! The King jumped out of his chair laughing and even did a little dance! He was so happy and felt so good. His sickness was gone and his was back to normal. He then turned to the Daoist and declared, “I am going to build a temple for you and give you a lot of gold.” The King immediately gave the order to build the temple and supply the Daoist with gold. The Daoist bowed and left. Once he had gone, the Senior Advisor approached the King and quietly said, “You Majesty, you need to be careful of this Daoist.” The King was surprised and asked, “Why?”