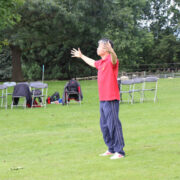 The King looked better, he looked ten years younger and healthier. The Daoist asked the King, “You Majesty, please follow me and copy what I do.” The King copied the Daoist as he raised up both his hands above his head and slowly lowered them down past his face, down to his Dāntián 丹田. He did this three times and then covered his Dāntián with both his palms, with the right palm over the left. The King did exactly what the Daoist did. When they had finished, the Daoist said, “Your Majesty, you should now take a bath and then go to bed and sleep until tomorrow. I will see you in the morning.” So, the King left the room and went back to his chambers to take a bath and go to bed. The Senior Advisor followed the King and asked, “You Majesty, how do you feel, are you alright?” The King replied, “I am alright, just a little tired.” The Senior Advisor was worried but did not say or do anything. He only ordered the servants to take care of the King. After his bath, the King went to bed and even though it was still daytime, he had a good sleep and did not wake up until late morning the next day.