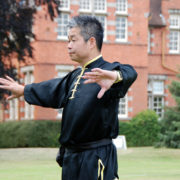 The King felt very hot, tingling broke out into a sweat, his breathing also became very deep and his body started shaking. The Doaist is seeing this and told him to keep calm and hold his position and reminded him not to move. On hearing the Daoist’s calm voice The King felt much better and was able to calm down. Suddenly one of the servants made noise. “Agh!” she exclaimed. Everybody looked at her and told her to keep quiet. She had cried out because she could suddenly see a lot of colours all around the Daoist and the King. Only she could see them, no one else. She could see red, yellow, blue, orange, green, white, pink, brown, in fact all different colours all around the King and the Daoist.

After some time, the Daoist was sweating heavily and looked tired. He lowered his hands and then said to the King, “Your Majesty, you can open your eyes now.” The King opened his eyes that everything looked brighter, more colourful, and more beautiful.