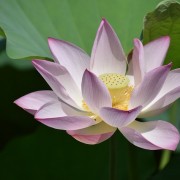 The room was very big with many plants positioned around it. Through the window the sun was shining in and it made the room comfortable and warm. It was a very calm and peaceful area. The King was sitting in a chair with his servants around, and his senior advisor was standing next to him. The Daoist came in and stood in front of the King and observed the room. Then he told the King to stand in the corner where the sun could shine on him. The King was happy to do whatever the Daoist told him. The Daoist instructed him to stand with his feet shoulder width apart, with his hands making a circle facing his Dāntián 丹田. The Daoist then said, “No matter what happens your majesty, do not move. Just close your eyes and I will use my Qì 氣 to heal you.” The King did exactly what the Daoist told him. He stood in the corner with his eyes closed, while all the servants and his senior advisor were watching. The Daoist made a sword fingers with his middle and index fingers of both hands and pointed at the King’s Dāntián and Middle Dāntián 中丹田, and transmitted Qì to the King’s body.