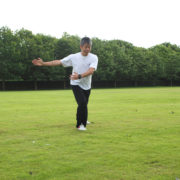 Everyone was surprised and many exclaimed, “What just happened?” The King looked at them and then shouted orders for the palace medical staff to come and help the Senior Advisor and the guards who had been holding the Daoist. The medical staff quickly arrived and checked on the Senior Advisor and the guards. They found that their faces were pale, and their eyes were hardly open. When they asked the Senior Advisor how he felt, he answered in a low voice, “I feel exhausted.” The guards also felt the same. So, the medical staff took them all away to rooms where the doctors could help them. Everyone was busy rushing around when the King said, “Where is the Daoist?” They all stopped and looked around, but his was not there. The King ordered the whole palace to be searched, but no one could find him, he had vanished! The King even ordered a search of the whole country, but still no one could find him, it was as if he never existed!

A few days later the King began to feel itchy and the red spots started to reappear. Eventually they covered his whole body, but this time, there was no one who could help.