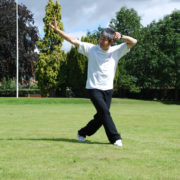 Everyone wants to know what happened to the Daoist, the Senior Advisor the guards.

If we have good Qi, then we can use it to heal people. This means we are able to transmit the Qi from our body to the other person or even an object. The Daoist had obviously reached a very high level or Qigong and he could transmit his Qi and also absorb Qi from others. When the Senior Advisor touched the Daoist’s Shānzhōng 膻中 point, the Daoist absorbed his Qi and at the same time he took the Qi from the guards who were touching him and who were close to him. The Daoist told them that if they touched his Shānzhōng point then they could take his power. He said this so that they would believe his could do this and this belief also allowed the Daoist to absorb their Qi. Why had all this happened? This was because the Senior Advisor was scared that the King would like the Daoist more then him and he would lose his position. So he wanted to take the Daoist’s power as soon as possible.