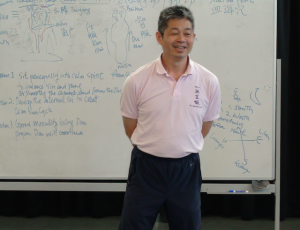 What is Qi 氣? To understand Qi we must understand the Chinese character for Qi and it is the same traditional character in Chinese, Korean and Japanese.

The character for Qi is made up to two parts one is:

And this means steam.

The other part is:

And this means rice.

Chinese people have always eaten a lot of rice because in the old times, 90% of all Chinese people were farmers, and even today we still have a lot of farmers. The character 米 is like a plant with roots and branches growing in the soil. When we cook rice, we put it in a pot and add water. We then put this over a fire to cook. After a while, steam will start to rise up and this steam we call Qi. This was the first image of Qi. Qi is not just steam, however, it is something that also connects with our feeling, so we might be able to feel it and also in some cases smell it.

Qi does not have a fixed form, it is moving, flowing and comes from a subject.