Squeeze a Piece Of Paper 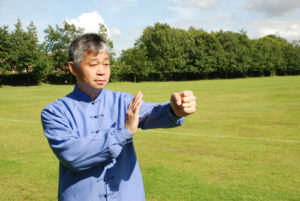 My uncle Tse Chiu Hung 謝超雄 was a herbalist and he grew a lot of herbs in a garden plot far away from his apartment. Most people in Hong Kong live in apartment blocks and only rich people can live in their own separate house.  So from time to time he would go to that garden to pick herbs for his medicine, and sometimes I would go with him. On the journey we did not talk too much, but I would follow him up to his garden. We had to walk up a hill, which was not too hard, but it took about 45 minutes. When we got there I saw he had a Wooden Dummy and this was the first time I had seen a Wing Chun Wooden Dummy. He had also built some plum blossom polls for standing on and walking around. These were for training footwork during fighting. This was all new to me.

I helped my uncle to move things around the garden and dug the soil making it ready to plant new herbs. While we did all this work we still did not talk too much I just followed and listened to what he told me to do. Once in a while he would show me some Wing Chun skill and basic techniques on the Wooden Dummy. Once he gave me a big piece of newspaper and told me to make it into a ball. He told me to squeeze it in my fist and said the harder I could do it the stronger my fist would get. So I did a lot of this training and my first became stronger.