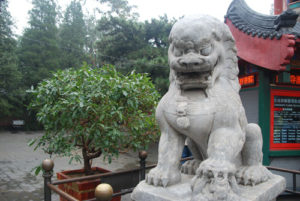 After many years of training Siu Lim Tao, my stance became strong and I could feel that my bones were stronger. I also felt Qi flowing inside my body and I wanted to know more about this.  Sadly, after many years my uncle passed away and although we did not talk too much he had opened the door of Wing Chun for me and introduce me to Qi.  I was very lucky to have him as my first Sifu at such a young age. He had given me a good foundation, even though looking back I can see my Wing Chun was still not good enough.

At the start of 1982 I joined the Royal Hong Kong police force.  Being a policeman meant now I have more money which I could spend on finding a good teacher. I took some courses in Qigong and learnt some basic standing and Spontaneous Qigong and Standing Qigong. However,  I wanted more.  At the time there were a lot of Chinese Qigong magazines being published all over China and luckily we could get them in Hong Kong.  It was then that I came across one Qigong master who told me that if I wanted to learn a high level of Qigong I needed to go to China to meet a master whose name was Yang Mei Jun 楊梅君.