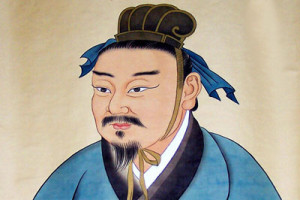 The fourth book of Rujia儒家 is Meng Zi孟子. Meng Zi is a man who was born much later, after Kong Zi had passed away and he lived between 372BC to 289BC. His name is Meng Ke孟軻 After Kong Zi passed away he was one of the best Rujia philosopher and so now everybody who studies Rujia must study Meng Zi’s philosophy. This book also records conversations Meng Zi had with various people.

In the first chapter,

Meng Zi visits the King of Wei梁惠王. At that time, China was not a united country and was made up of many different countries, some small and some larger, a little like Europe. Men Zi travelled to the country of Wei魏 to try and persuade it’s King to accept his philosophy in running his country. The King of Wei asked Meng Zi, “What benefit are you bringing me?” Meng Zi replied, “Your majesty, why do we have to talk of benefit when we can talk about good morality? If a King always thinks of his own benefit then his ministers will also think of their own benefit, then the ordinary citizens will think of their own benefit as well. If everyone is doing thing based on their own benefit, then the entire country will be in danger.”

“Everyone wants more and considers their own benefit before good morality. However, no one with good morality ignores their parents and leaves their King. So if all Kings focused on good morality there is no need to talk of benefit.”

From this very first chapter we can see the philosophy of Meng Zi.

These four classic books of Rujia are the foundation of Rujia and in the past all scholars had to study it as it was one of the major parts of the Imperial Examinations.