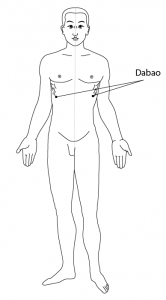 Near by the Middle Dantian中丹田 there are two acupuncture points that relate to it. These are the Dabao 大包 points and they are found on either side of the Middle Dantian and help more Qi to flow to the there. They are like two front-side windows and they help breathing, lung and heart problems. If these points are open, then the breathing will be better, the mind will be clear and the emotions will be stable.

The Dabao points belong to the Spleen Channel of the Foot Taiyin 足太陰脾經 , and so they also benefit the spleen as well. They are found two finger widths from the outside edge of the nipple and down under the sixth rib. Usually we can measure this be closing the arm against the rib cage, completely bending the elbow and lifting the shoulder. The Dabao point is found under the tip of the elbow.

“Da 大” means “Big” and “Bao 包” means “Wrap Over”, so it means it cover a lot of area. They are also very sensitive. When the Tanzhong膻中point is open we can feel the Dabao points as well.

In the 2nd 64 of Dayan Qigong大雁氣功六後十四, movement 16 is called “Hitting the Points點穴”. In this movement we hit the Dabao points. At the end of movement 42 “Sink Qi Down and Draw Back the Wings落膀收翅” we also rest five fingers on the Dabao points. So we can see that these are very important Acupuncture points.