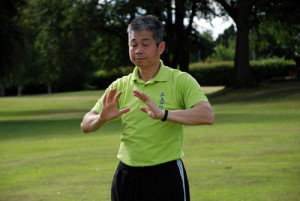 We have talked about how the Ren任脉 and Du Mai督脉 are the second as third most important channels because they form the Xiao Zhou Tian小周天, Small Heavenly Circle, when they join together. Once the Xiao Zhou Tian if formed the Qi will keep flowing and all the 12 Major Channels will be smooth and the Qi will flow better. The body’s system will be strong and we would rather focus on this than induvial channels.

However, between the Ren and Du Mai, do you know which is more important? This is the Ren Mai. Although with both Mai the Qi starts at the bottom at the Huiyin point會陰 and rises up the front and back of the body, but if we want the Qi to flow better we must be able to let the Qi flow down the front via the Ren Mai. The more we bring the Qi down, as in Fang Song放鬆 and Shou Gong 收功 where we bring the Qi down from the head to the Dantian, then the Dantian will be stronger and the flow of Qi will also be stronger. Then it can rise up from the Dantian. We cannot bring the Qi up by ourselves, we need to bring the Qi down first. Then when there is enough Qi it will rise up by itself. This is the natural way.