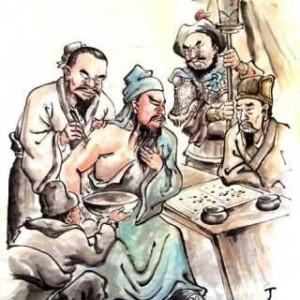 During the Three Kingdoms Period三國時代 in one of the battle, General Guan Yu關羽 was shot by an arrow. He asked Hwa Tou to treat him as he believed the arrow was poisoned. Hwa Tou said, “I need to cut some of poisoned bone area away, but unfortunately I do not have any anaesthetic and it will be very painful!” General Guan Yu replied, “Don’t worry about that, fetch me a chess board and chess pieces and it will be alright.”

So Hwa Tou began to cut away the poisoned on his bone on General Guan Yu’s arm, while Guan Yu played chess with another general. Guan Yu was focused on the game that he did not notice the pain in his arm.

Finally all the poisoned flesh had been removed and the Guan Yu was cured. Everyone was so impressed by Guan Yu’s patience and ability to handle the pain and change his thinking. They were also impressed with Hwa Tou’s surgical skills. So over 2000 years ago Chinese medicine already had knowledge of surgery and the Chinese Medicine passed down today still follows the same principles and follows the natural way.