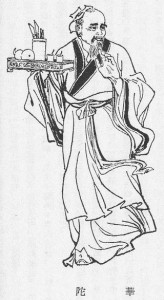 Hwa Tou is well known as being one of the best ever Chinese Doctors. He was able to just look at his patients and know what their problems were. He would only use a few herbs and when he gave people acupuncture he would not use many needles in fact only one or two needles. Whenever he used a needle he would ask the patient when he or she felt the needle and would not keep the needle in for long. Afterwards the patient would soon recover.

We can tell from this that a highly skilled Chinese doctor will only use a few herbs and one or two needles for acupuncture. Once they have found the problem they will concentrate on that area and then the problem will be soon gone.

I have always believed that a good doctor does not need to use a lot of medicine and usually only around three treatments for the patient to recover. He or she will also point out the things the patient needs to be careful about, for example what foods to avoid, what emotions to try and calm down and what work to be careful about. They will find the source of the problem, treat the source of the problem and then the illness will be cured and the patient will recover.