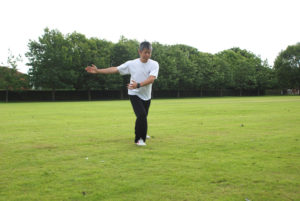 Every morning Grandmaster Yang Meijun楊梅君 went to Xuan Wu Park 宣武公園 to treat her patients.  To begin with there were not too many and her treatments were very effective. All of them felt good and were getting better because she not only treated them but she had also started to teach them the Wild Goose Qigong 大雁氣功. Grandmaster Yang knew that it would be very hard work if she did everything herself as she was already in her 80s. So she chose some young, keen students and taught and corrected them more so that they could help teach.  After a few months her name had become very popular and many people were coming to see her for treatment. Grandmaster Yang found this was the right thing to do, to help more people.  She knew that within the Dayan System the rule was that only one person was allowed to be taught the skill.  Now she had opened up the secret skill to help more people rather than just keeping it for herself so that the skill could live longer.  However, she knew that she could not just keep using her energy because it was quite exhausting treating people with her Qi. To help maintain her Qi she practised more at night and then in the daytime used her energy to help people.  As she grew more popular people would even come and stay the night in the park so that they could see her in the morning. Grandmaster Yang realised that she might become too popular.  So she decided to move away and worked in a hospital where she was introduced to by one of her patients.