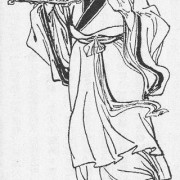 Wèi Bó Yáng 魏伯陽 was a Daoist who lived between 151-221, during the Eastern Han Dynasty 東漢. His original name was Wèi Ao 魏翱 and his hometown was Huìjī Shàng Yú 會稽上虞 which is in today’s Zhèjiāng Province 浙江省. As a Daoist, he wanted to become an Immortal. In Chinese, an Immortal is someone who has died, but their spirit continued to live on, and some people can even see them in their spirit form, but of course, others cannot. Therefore, an Immortal had magic powers. In traditional Chinese culture, people believe that when we die, we are reincarnated into a next life. What that next life will be is determined by what you did in the previous life. So, if you did good things, your next life is better, and if you did bad things, then your next life is worse. However, if you became an Immortal, then you no longer needed to reincarnate and so you could live as the same person forever, just like Guān Yǔ 關羽, Yuè Fēi 岳飛 and many other heroes throughout Chinese history, I believe my Sifu Yang Mei Jun楊梅君 is an Immortal too.

Wèi Bó Yáng had a rich family and a good education, but he did not want his family’s money or to hold a high position in the government. Instead, he loved Daoism and followed Daoist principles and Lǎozi Thinking 老子思想. He worked very hard to become an Immortal and everyday he developed his alchemy in order to make the tablet that would enable him to become an Immortal. Sometime what he made was an unusual Chinese Medicine, some of them was even poison.