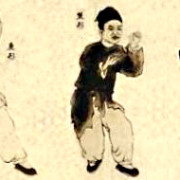 Wèi Bó Yáng 魏伯陽 had a few students, who believed, followed, and obeyed his instructions. Wèi Bó Yáng travelled all over China studying Daoist skills, but it was at Zhǎng Bái Shān 長白山 (Forever White Mountain), on the border of China and North Korea, he found his Sifu. His Sifu taught him a lot of Daoist magic, particularly about making Immortality medicine. After all this study, Wèi Bó Yáng went to live in Luòyáng 洛陽, which is a city to the West of Hénán Province 河南省 and he would go to the countryside to make his immortality medicine. He also bought three close disciples with him and then spent many years trying to make his immortality medicine. Over the years, he made a few, but each time they failed to work. After failing so many times, Wèi Bó Yáng finally made one that he truly believed would work. He gathered his disciple around and said to them, “My dear disciples, we have been working so hard for many years, trying to make this Immortality tablet and we have failed so many times. Now I believe that this time it is right and this is the one!”