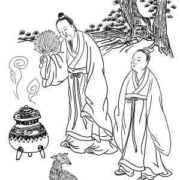 Wèi Bó Yáng’s  魏伯陽 three disciples were so happy to hear that, even though their Sīfú had said the same thing a few times before. Despite their failures the last time, they always believed their Sīfú would succeed and they all hoped that this time he was right and they could all become immortal and would no longer have to suffer in this life. Some people believe that our lives are suffering because what we had done in our past many lives, so we pay back on this life or the future lives until we become Immortals, or Buddhas. They believe the best life is no suffering, only happiness. This is what Daoism and Buddhism teach – a happy life has no suffering.

Wèi Bó Yáng’s disciples had been waiting for their Sīfú’s Immortal medicine tablets for a long time and he had made a few, more than enough for everyone. He picked up one of the tablets and said, “This medicine should work, but I still want to test it and make sure that it does work.” He called his dog and said, “We will give a tablet to the dog and we will see what happens. If it works and the dog becomes immortal, then we can take the medicine as well, but if the dog dies then we will know we have failed again.”  So Wèi Bó Yáng mixed the medicine into some food and fed it to his dog.