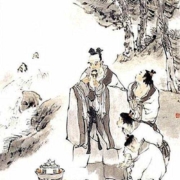 The dog ate the immortality medicine. Sometime later one of the disciples went to check on the dog and found it lying on the floor. He bent down to see if it was ok, but it was not breathing. The disciple called out, “The dog has died!” Now everyone knew that they must have failed again. However, Wèi Bó Yáng 魏伯陽 said, “I have tried so many time and I still really believe that this is the one, the real immorality medicine. The dog has died and it means I have failed again. This is my responsibility so I will take the medicine like the dog.” Wèi Bó Yáng took the medicine, and after a while he also died. All the disciples were beside themselves and did not know what to do, but then one senior disciple came forward. He said, “I am the senior disciple, I always follow my Sīfú, I trust him no matter what. Now he has taken the medicine and I will follow him.” So he took the medicine, soon after he died as well.