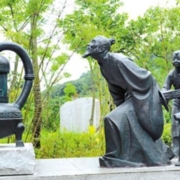 The Two junior disciples looked at each other. They were both scared. One of them said, “Now Sīfú and Sihing have died! We should bury them and go back home.” They agreed and both thought that they were lucky to be alive and they had not taken the medicine as well. They buried their Sīfú, Sihing and the dog and then went back home.

After the two disciples had left, Wèi Bó Yáng 魏伯陽, the senior disciple and they dog all merged from the soil. They were now immortal and the medicine had really worked. Wèi Bó Yáng had known it would work and he wanted to test his disciples to see if they were loyal and so deserved to become immortal. He knew that his senior disciple always followed him and did whatever he said. So now they were immortal, and even the dog was immortal. So they walked down the mountain and at the bottom they met a wood cutter. Wèi Bó Yáng wrote a letter and gave it to the wood cutter together with some money and told him to deliver the letter to his two disciples. So the wood cutter took the letter to Wèi Bó Yáng’s disciples.