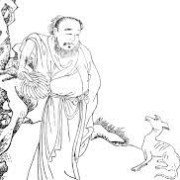 When the two disciples saw the letter they realised their Sīfú, Sihing and the dog were alive and were all now immortal. They regretted they had not listened to their Sīfú and that he had been testing them.

This story spread out through Luòyáng 洛陽 and everyone knew how Wèi Bó Yáng 魏伯陽 had become an immortal. This story was recorded in a book called Zhōu Yì Cān Tóng Qì 周易參同契 (Kinship of Three – Zou Dynasty Yijing).  Wèi Bó Yáng did not just make the medicine for himself, he wrote down the formula and how to make it. However, there was some poison in it, like mercury, so I do not suggest we follow it. He wrote down the prescription over 2000 years ago and the medicine then can be different to what it is now.

There are so many stories of Daoist Immortals and they are fascinating to read. Whether or not immortality and living forever exits or not, the principles of Daoism are some of the best ways to live. Who knows what happens after we die?