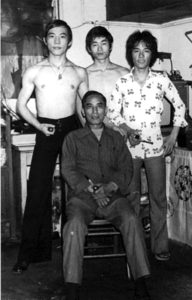 When I was 11 years old, my father took me to see the Bruce Lee 李小龍 movie The Big Boss.  I was so impressed. I think at that time most young people in the world were impressed by Bruce Lee’s fighting skill, his charisma, his muscular physique, but he did not have a big body.

To a little boy watching someone so powerful he of course he became my hero. After the movie I was so full of energy. I copied his movements, his screams and I said to myself I wanted to be like him when I grew up, not a movie star but a Kung Fu man. This was the only thing I wanted to be as I was growing up.

Then I broke my left forearm and so my father took me to see my Uncle Tse Chiu Hung 謝超雄, who was a traditional Chinese Herbalist. My Uncle checked my arm and then he moved my bones back into their correct place. I didn’t even notice it was that quick. Then he applied some herbs to my arm and it immediately started to feel better. After that I kept going back to see my Uncle so he could check my arm and it was then I noticed him teaching some students Kung Fu! This was my chance to learn and so I asked him to teach me, but he refused!