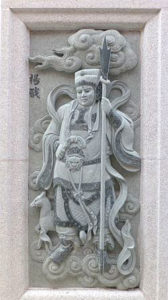 They sent the Heavenly Army down to the human world to arrest Yao Ji and bring her back to heaven. However, Yiao Ji  did not want to be separated from her husband and children and so she resisted  and fought  back. Unfortunately her husband, Yang Tian You, and eldest son, Yang Jiao died in the fighting. Yao Ji was captured and imprisoned under Plum Mountain 姚山.

Fortunately, second son (Er Lang) Yang Jian and his younger sister escaped unhurt, but Yang Jian wanted to rescue his mother but you needed magical powers in order to fight the Army of Heaven. So Yang Jian and his sister travelled all over China looking for a teacher who could teach him this skill.