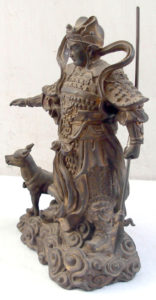 Yang Jian 楊戬 took his sister from the South to the North and East in the West of China! During their travels they suffered all kinds of hardship from terrible weather, struggling up high mountains and hunger and the disappointment of never finding a teacher you could teach them what they needed!

The goddess Nu Wa 女媧 watched them and she felt sorry seeing these children suffer so much for them mother. She decided to help them and send her student, Jade Cauldron Immortal 玉鼎真人, to teach Yang Jian. Yang Jian studied hard and learnt all the magical powers and high level fighting skills from Jade Cauldron Immortal. He even developed his Third Eye so he could see through everything that ordinary people could not see. In order to save his mother, Jade Cauldron Immortal, gave Yang Jian a special axe called Opening Heaven Spiritual Axe 開天神斧.

Yao Ji 瑶姬 looked at her second son (Er Lang 二郎) Yang Jian and burst in to tears. Reunited mother and son hugged each other. Yang Jiao noticed that his mother had a lot of white hair all over her body and realised that this was because of the many years she had spent in the dark and he knew he had to save her and get rid of those white hairs.