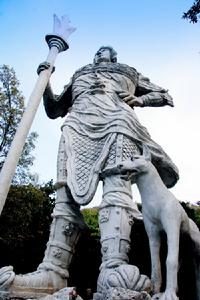 Yang Jian 楊戬 knew that the white hair was caused by many years of damp and no light or warmth from the sun. So he took his mother out in the open air so that she could take the heat and light from the sun.  The white hairs started to disappear.

Unfortunately the Jade Emperor 玉帝 new about this and was very angry!  He released the Nine Suns to dry up his sister!  Their heat was too much and in the end Yao Ji 瑶姬 died! Yang Jian was so upset and in a fury flew up and caught two suns in each hand and buried them under too big mountains.  The seven other suns flew around the sky to avoid being caught by Yang Jian. However Yang Jiao used his stick to carry more mountains to catch all and trapped them under but one of the suns escaped. No matter how hard Yang Jian tried he could not catch the last sun! In the end, having chased it to the Eastern Sea 東海 he fell unconscious through exhaustion! The Third Princess of the Eastern Sea Dragon King 東海龍王三公主 saw him fall and decided to save him.  In the end they fell in love with each other and got married, but Yang Jian was still very angry at his uncle the Jade Emperor 玉帝.

The Jade Emperor knew that he had acted wrongly, and to make up for this, he gave Yang Jian a very good position in heaven.  But Yang Jian never went to see his uncle the Jade Emperor.