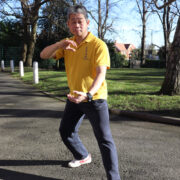 There is a story about a man who betrayed his country and his emperor. When he was captured, the Emperor sentenced him to death. He was made to drink a cup of poisoned wine. After he had drunk it he suddenly collapsed and blood began seeping out of his eye, ears, nose ad mouth. Then he died. The poison made all his Seven Hollows bleed! You can see many scenes like this if you watch or Chinese Kung Fu movies or novels. So you can see, making the Seven Hollows bleed is a very extreme punishment. In these stories, the poison makes the internal organs and this is released through the Seven Hollows. For Chinese people, the Seven Hollows bleeding is a very bad end. If you know the real story of Grandmaster Ip Man (see Wing Chun Notes 100-120) you will remember that  Lèuhng Bīk 梁璧  taught Ip Man the Diǎn Xué (Dím Yuht  in Cantonese) 點穴 skill (see Wing Chun Note 117 Story of Ip Man Studying Wing Chun葉問學習詠春的故事 Part 17). Before he was taught this skill, Ip Man had to swear the following oath, to not use the skill improperly or teach the skill to unworthy students.

“One red spot in the centre of China (this means it is a very important thing in Chinese Kung Fu World). Do not teach and tell the bad people about it. If you teach and tell them, then it will cause your own death and blood will flow from your eyes, nose, ears and mouth (Seven Hollows)