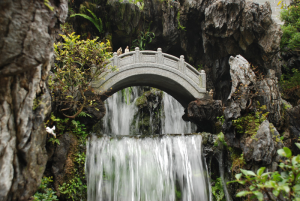 In Chinese Culture there are three major ethics or philosophies. One is Daoism道, one the Confucianism䆁 and the third is 佛Buddhism. The first two are the original ethics. Buddhism was adopted by Chinese Culture later at around 67AD in Han Dynasty 漢朝 and this Chinese Buddhism became very close to Daoist and Confucian philosophy. Although many follow these three as religions, they are more a way of life that follow the education of Shakyamuni – for Buddhism, Laozi老子– for Daoism and Kongzi孔子–Confucianism (Rujia or Rusim).

Daoism is about nature and some people will translate it as “the Way”. This is correct. Chinese writing is based on pictures or drawings and then later developed into strokes and lines. Dao 道has two parts one is 首which means head, a human head. This means person. The second part辵 means walking and stopping. It is also a boat on the water. So a person in a boat which is on the water and so the boat will follow the flow of the water, or the flow of the river or lake etc. To follow the flow is to follow the natural way. This is Dao. So simply said, Dao means follow nature. Dao also means “Way” or “Road. So the best way it to always follow nature as this is Dao.