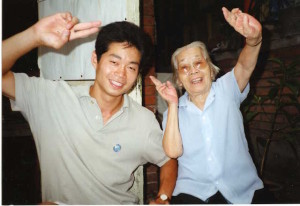 Every day I went to Nai Nai’s place to practise Wild Goose Qigong. Each time I felt excited as I had discovered something about my body that I did not know before. Now not only had I discovered it but I was also developing it and I could feel my Qi growing stronger. I wanted to be like Nai Nai, healthy and strong.

I was still wondering where that fragrance had come from. It was 10 years later, in 1995 that I found out as Nai Nai taught me a skill called “Opening the Chest Releasing Fragrance Gong”, which is an amazing skill.

After our daily practice we would all come together and listen to Nai Nai as she explained more about the principles of Qigong and some of her stories. We also sometimes had lunch with her, just like one big family. Without that close family feeling I do not know if I could have learnt that much. I keep this way even to this day when I teach my student and make the Centre strong like one big family.